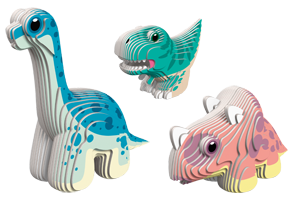 First of all detach all of the die-cut parts from the cardboard and then glue them together layer for layer – and the prehistoric giant takes form. That is how easy it is to bring the brontosaurus, triceratops and T-Rex back to life with the Crafty Figurines. The figurines produced by Spielkartenfabrik Altenburg provide plenty of crafting fun for the young and old and transform flat, pliable cardboard sheets into 3D models with an impressive and high-quality haptic feel and cute, child-friendly look in blue, pink or turquoise.

So, it is hardly surprising that the cardboard companions played a major role in the discounter Netto’s collecting card campaign “Prehistoric giants”: During the campaign period customers received a packet of collecting cards on the theme for every purchase of ten Euros and were able to buy the matching collector’s album or one of three dinosaur crafting figures for 2.99 Euros. In 2021, the motto of the no less than eighth cooperation between Spielkartenfabrik Altenburg and Netto was sustainability and aimed to examine the consequences of the climate change based on the lives and extinction of the dinosaurs. To further underline the theme the dinos are made from FSC-certified cardboard comprising of a high share of waste paper. To keep the usage of material down to a minimum, all important information was also printed on the totally recyclable folding box. So much love to (sustainable) detail also went down well with the jury of the Promotional Gift Award, which promptly awarded a prize in the category Best Practice to the Crafty Figurines.