Warm socks for the climate 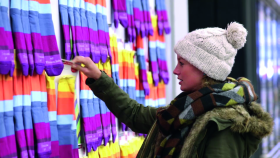 In the scope of the campaign “Together it is climate protection” by the Federal Ministry for the Environment, Nature, Construction and Nuclear Safety (BMUB), the Berliner agency called Tinkerbelle booked a large surface on Alexanderplatz and attached pairs of socks to it. Following the motto “Turn the heating down and wear warm socks”, the passers-by were able to take the climate protection socks home with them. A promotion card provided background information on the campaign, which was filmed and thus prolonged via the Internet. The more socks that were taken, the clearer the message on the poster underneath was to read, the campaign was repeated several times. In addition to this, the socks were distributed at events in the scope of the campaign as well as at BMUB events.

The socks made of Oeko-Tex-certified cotton and spandex were produced in Germany, the campaign claim “Together it is climate production” was distributed together with each pair of socks, which created a second level of meaning. The “sock wall” at Alexanderplatz was one of the selective out-of-home measures of the large-scale online campaign, which attained over three million YouTube views as well as comprehensive coverage on TV and in the press – as well as a Promotional Gift Award 2017 in the category Best Practice.