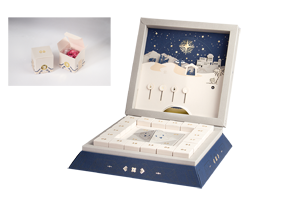 Every year the offset printing shop Schwarzach presents its customers with a very special advent calendar that combines all of the customising skills of the Austrian company. The 2018 edition came in the form of a casket that fulfilled high haptic and optic quality demands, while at the same time emanating elegance and discretion. A slanted base in dark-blue cardboard containing four boxes inside for the four Advent Sundays formed the fundament of the advent calendar, which also featured recesses for 20 further small parcels, each of which contained a sweet surprise. The centrepiece of the advent calendar that received a prize in the category Premium Products is the interior of the lid: The night scene shows a starlit sky, a landscape and a city, designed and customised per laser cut and hot foil, partly also per nano embossing. There is a date display on the right in a round cut-out, which can be reset using a disc, whereby every time it is adjusted the night sky changes too. Instead of lighting a candle, every Sunday one slider is pushed upwards – and in this way the overall picture develops further day by day until it becomes completely visible on Christmas Eve. The 2018 calendar edition was once again produced following an ecological and socially sustainable process. For example, the material is FSC®-certified and the calendars were imprinted and customised in a climate-neutral manner. The beautiful advent calendar is picked and packed by an initiative for long-term unemployed people. The calendar can be filled again and again every year and can thus be used many times.