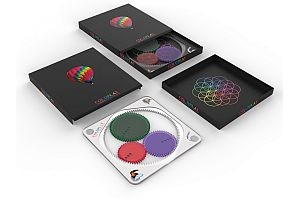 Together with Live Nation, Touch of Ginger developed three merchandising items for the stadium tour for Coldplay’s current album “A Head Full of Dreams” and positioned itself at the top of the marketing charts in the process. The album cover is decorated with an esoteric symbol depicting overlapping circles – the Flower of Life – as well as with a kaleidoscope-like collage of dream visions. The designers Gary Moore and Adam Cash created a matching mobile with similar psychedelic motifs, the packaging of which is reminiscent of a classic vinyl double album. The individual parts are made up of broken pieces of “records” and hung up on the supplied nylon threads. Fans can use the second item, a three-piece template set with Spirograph cogs and a frame, to reproduce the Flower of Life. The third item is a more a classic collectors’ item – a metal key pendant featuring the cover motif. The construction kit mobile and the Spirograph set involve the fans of the British soft rock band in a creative way, whereas the key pendant accessory promises to become a long-lasting hit with collector’s value. According to company accounts, the creative realisation not only impressed the musicians, but also the jury of the Promotional Gift Award 2018. They awarded it a distinction in the category Merchandising.