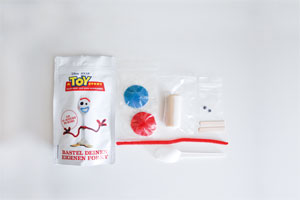 One takes a plastic spork, a pipe cleaner, halved ice cream sticks, two goggle eyes and red, blue and white vegan modelling clay and crafts one’s own film hero. This was the case many times for the Disney Forky Crafting Set, which Knetä had developed jointly with Fyff for Walt Disney. Forky is the main character of the Disney film, Toystory 4, which was released in the cinemas in the summer of 2019. The action figure is built by the young girl, Bonny, using the same components that are found in the crafting set, and Forky ultimately comes to life. Hence, the perfect implementation enables users to reenact one of the key scenes of the film, earning Knetä a Promotional Gift Award 2020 in the category Custom-made Designs.

The basic material of the crafting set is an entirely vegan modelling clay that is made in Germany from 100% natural ingredients and which is packed inside resealable jars or bags so that it can be used for as long as possible. The crafting instructions are found on the reverse side of the packet.