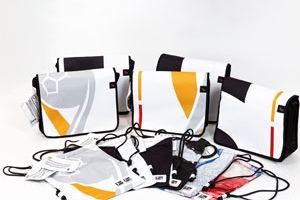 90 minutes of pure tension, the celebration of goals and tons of adrenalin: In 2018, the German premiere league football clubs, Eintracht Frankfurt and Bayern Munich, competed against each other in the so-called Supercup. In order to retain the atmosphere of this encounter even after the final whistle had blown, together with the DFL German Football League the promotional products agency, Crimex, developed the limited edition 100% Stadium Atmosphere, comprising of 280 bags and 750 pouches. Made in Europe from old banners that hung on the fan stands at the Commerzbank Arena in Frankfurt during the Supercup, the edition makes the stadium atmosphere literally tangible and is also in line with the popular upcycling trend – two factors that convinced the jury to reward the collection with a Promotional Gift Award in the category Best Practice.

In order to further underline the storytelling, photos from the stadium were attached to the hangtags of the bags and pouches; a high-quality logo patch decorates the pouch, whereas the bags are equipped with a woven label. Participants of the DFL 2019 Annual General Meeting as well as the volunteers of the 2019 Supercup received a bag as a token of appreciation.