Close to the cosmos with Conni 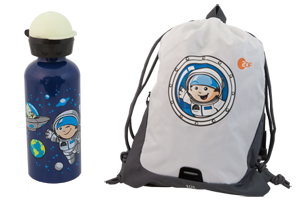 Every child in Germany knows the “Mainzel Men” from the TV channel ZDF. Whilst the ESA astronaut Alexander Gerst was on the “Horizons” mission, he also met up with the Mainzel man, Conni, in space, dressed in a spaceman suit, the “Astro Mainzel”. The figure that stands approx. 10 cm high, was developed from space-compatible material using the 3D printing process especially for the mission. Based on this encounter, in conjunction with ZDF, the ZDF Service GmbH dared to take a step into the unknown on the advertising front and created the Astro collection, which among others comprises of a sticker postcard, cap, pill box, gym bag, floating ballpoint pen, magnet and badge, a Buff multi-functional cloth, a T-shirt produced from Standard 100 by Oeko-Tex® organic cotton by sigikid for children and adults as well as a recyclable “Swiss-made” child’s drinking bottle by Sigg. All of the products were either designed in the style of the Astro Mainzel, Conni, or customised with the character: Whilst for instance the drinking bottle displays glowing elements (the lid and alien light up in the dark), the T-shirts sporting a Mainzel motif on the front and on the neck as well as a small Astro Mainzel pendant are true eyecatchers. The gym bag resembles a rocket, from which Conni is waving cheerfully. The majority of the items were produced exclusively for sale via the ZDF shops. The jury of the Promotional Gift Award 2019 praised the loveable design and the coherent collection and awarded it a distinction in the category Merchandising. Each item makes the mission into space tangible and the promotion items impressed both Mainzel men fans and space-enthusiasts of all ages at the speed of light.