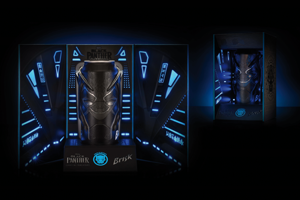 On behalf of the film sponsor, PepsiCo, Karl Knauer developed the Marvel blockbusters Black Panther, an absolutely Oscar-worthy packaging for the ice tea “Brisk”, which aimed to whet the opinion-makers’ appetites for the event. The can in the design of the superhero Black Panther that is customised with a 3D print is presented inside packaging comprising of several layers of cardboard and the HiLight – smart LEDs® technology, which is patented by Karl Knauer. The sustainable, modern, “made in Germany” technology that is reduced down to the minimum makes it possible to integrate light ultra-thin presentations into every paper, cardboard and corrugated cardboard product. In addition to embossings in all facets as well as a sophisticated folding mechanism a 20-second light choreography in five separately controlled zones provide a surprise effect when opening the box that is totally designed in black. The technology allows flashing or pulsating light effects, permanent solutions (supported for instance by mini solar cells) through to elaborate light choreographies that can be played again and again at any time at the push of a button. The Black Panther packaging with the integrated HiLight – smart LEDs® technology also impressed the jury of the Promotional Gift Award 2019 with its innovative power and was rewarded with a prize in the category Best Practice. The product convinces with its head-turning effects and impressive ability to stun the onlooker at the very first glance.