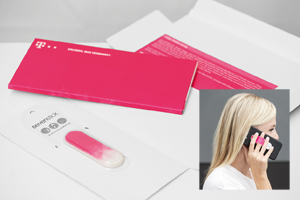 To promote its “Telekom Megadeal” campaign in a sustainable way, the telecommunications company was looking for a haptic messenger that is used for the everyday routine, which is recognised as a Telekom product without an attention-grabbing branding – the ideal preconditions for the Sevenstick® by S/ Consept: The multifunctional fixture can be attached to the rear side of the smartphone for instance due to its self-adhesive surface. Thanks to its integrated loop, the telephone can thus be held with just one finger. What’s more, the clever accessory also doubles up as a smartphone stand, prevents entangled cables and also keeps hold of towels, glasses or pens. The model implemented for Telekom was branded in the company’s CI and distributed favourably-priced in a specially designed packaging as a circular to smartphone users aged between 16 and 35 – with a fantastic response: The megadeal offer that was promoted using Sevenstick®, which involves free products being ordered, attracted hundreds of thousands of users to the Telekom portals with the result that the items offered were sold out within a short space of time. Due to its immense success, the campaign was repeated and the magenta-coloured promotional product virtually achieved a cult status in the social media and brought S/Consept an award in the category Best Practice.