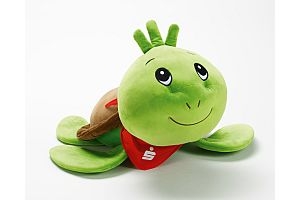 Every year the Deutsche Sparkassenverlag (DSV), the publishing house of the German savings bank, develops an extensive collection of promotional products that are implemented in all branches of the bank nationwide. A new key visual plays the leading role in the campaign every year. Initially it is developed as a cuddly toy, which is then in turn applied to haptic messengers of all kinds. The lead character and mascot of World Savings Day in 2017 was the turtle, Eddi, which in line with the target groups was created in two versions, one for small children and one for youths. In addition to the TÜV-certified plush executions – among others cuddly toys, puppets and key pendants – Eddi also decorates a wide selection of products: from piggy banks and lunch boxes, to swimming goggles and writing sets, plasticine and wallets, through to quiz sets and uniquely shaped fruit gums. The turtle was additionally integrated into the savings bank comic, Knax, and was present in digital form in mailings, a prize draw and on posters as part of the 360° communication. For the elaborately and affectionately designed implementation of the key visual on numerous items for young savers, the World Savings Day 2017 Collection was rewarded with an award in the category Best Practice.