Not just for football fans 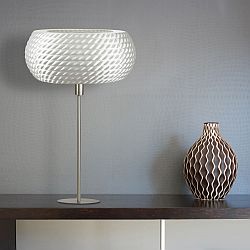 As the home grounds of the record champion club FC Bayern Munich, one is used to leaving the Allianz Arena with a trophy. The stadium has now won a very special distinction in its own right: a Promotional Gift Award 2018 in the category Merchandising. Because with the help of a 3D printer, UniMerch Merchandising has reproduced the Munich stadium as a true-to-detail lamp for football fans and stadium visitors, who want to take the atmosphere of the arena home with them. The lampshade forms the true to scale, reproduced wafer-thin outer shell of the Allianz Arena, which was printed in Germany in a resourceefficient manner using organic material that is free from petroleum. The lamp that the company developed together with Tagwerk Gbr for the Allianz Arena shop, is available as both a table lamp and a floor lamp with a stainless steel stand. An economical LED serves as the light source, its colour can be individually selected per remote control to light up the room in the desired colour. As a result of the interplay between the latest technology, the use of regrowing raw materials, the true-to-detail reproduction and individually selectable fluorescent colours, UniMerch brings the famous stadium to the homes of the fans in an impressive way. The Allianz Arena lamp is protected by a European design patent and is delivered by DHL GoGreen.